To share your memory on the wall of The Honourable Robert M. Thompson, sign in using one of the following options:

Provide comfort for the family by sending flowers or planting a tree in memory of The Honourable Robert M. Thompson

The gesture that can change the world

Rob was a partner in the law firm of Boddy, Ryerson from 1974 to 1996, where he practiced criminal and civil litigation and family law. During that time he also served as Federal Prosecutor for the Department of Justice. On February 20, 1996, Rob was appointed a Judge of the Ontario Court of Justice, General Division, now the Ontario Superior Court of Justice, and presided in this role for some 20 years in Owen Sound and Walkerton, before transferring back to the Brant, Haldimand and Norfolk area to be closer to his growing family members until his retirement on December 31, 2017.

Rob’s other interests and hobbies included carpentry, building, farming, gardening, photography, travel and fishing. His family will be kept busy for many months (years?) completing his projects. Too many plans – too much ambition – never enough time.

We would like to extend a special thank you to Dr. Alex Quinlan, the doctors and interns at London Health Sciences Centre -Transplant Unit, Dr. Paul Howatt and Woodstock General Hospital staff, and the staff at Brantford General Hospital. Rob and his family are also very appreciative of the excellent, compassionate, home care and companionship provided by the many nurses, PSW’s, physiotherapists, and occupational therapists during his illness.

At Rob’s request there will be no formal funeral or memorial service. A private family visitation is to be held followed by cremation. Arrangements entrusted to the Keith Ovington Funeral Home, Burford, Ontario. In lieu of flowers, any expressions of sympathy may be made by donation to London Health Sciences Centre (University Hospital) – Transplant Unit or to Woodstock General Hospital (Palliative Care). Keith Ovington 519-449-1112 www.keithovington.ca
Read Less

Print
A private family visitation is to be held followed by cremation.

Provide comfort for the family by sending flowers

We encourage you to share your most beloved memories of The Honourable Robert M. here, so that the family and other loved ones can always see it. You can upload cherished photographs, or share your favorite stories, and can even comment on those shared by others.

Posted Nov 10, 2019 at 12:02pm
I met Robert when he was a young lawyer living at Etonia, I knew him from court cases in Woodstock/Brantford etc. I was a police officer and as it turned out we had mutual friends, or persons of interest. I believe I spoke to him once at his residence. Lost tract of him when he became a judge. I had a very high opinion of him. Regards to his family.

Posted Nov 07, 2019 at 08:34am
Rob and most of your family have been well loved threads weaving through the fabric of my life. Sincere condolences and know that I think of you often and fondly and hold you in my heart.
It feels like the end of a truly great era.
With love, Diana Bates.
Comment Share
Share via:
MO

Posted Nov 07, 2019 at 07:10am
Our deepest condolences to Mary ( Dave ) and their families at this very sad and difficult time. Our thoughts and prayers go out to the entire family .May he RIP
Comment Share
Share via: 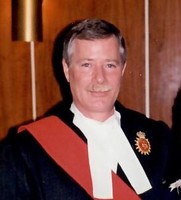