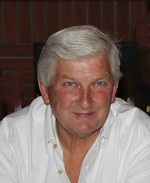 It is with heavy hearts that we announce Frank’s passing, surrounded by his loving family on Tuesday, October 15, 2019 at his home at the age of 74. Beloved husband of Brenda (nee Tune) for 40 years. Loving father of Justin (Jolene) and Michael (Cindy). Dear brother of Barbara, Geoffrey and Douglas. Predeceased by parents Justin (Jud) and Jean (nee Hollinrake) Read. One of Frank's greatest joys and his most honoured title was that of “Papa”. He will be deeply missed by Ryersyn, Gallagher, Campbell, Carter and Zachary. Despite his lifetime of thriftiness, he was happy to spoil his grandkids.

A graduate of Western University, Frank spent his working years in both Insurance and Real Estate. He spent many years as an active member of the Brantford Rotary Club and the Boys & Girls Club, serving as President in both. Frank enjoyed his retirement years traveling extensively, watching golf, exploring new technologies, spending many hours in Dunnville at the cottage and supporting his treasured community of Canning.

Friends will be received at the Keith Ovington Funeral Home, 134 King Street, Burford on Friday from 6-9 p.m. and Saturday October 19, 2019 from 10-11 a.m. followed by a Funeral Service to be held in the chapel at 11:00 a.m. As expressions of sympathy, donations in Frank’s memory may be made to the Stedman Community Hospice or a charity of your choice. Keith Ovington 519-449-1112 www.keithovington.ca

All rights reserved. This obituary is also archived at obittree.com