To share your memory on the wall of Karl Hepp, sign in using one of the following options:

His memory lives on in his devoted wife, Joan, of 44 years, his two children who adored him, Laura (Michael) of South Carolina, and Matthew (Chelsey) of Burford, and the grandchildren who lit up his life, Harper, Karlin, and Grey. He is also survived by his loving aunt Katie, brothers, John (Karen) and Mike, and sister Mary-Anne, sister-in-law Jane, and his nephews, Mike, Doug, Cullen, and Keaghan. Karl was preceded in death by his parents Karl Sr. and Julia, his older brother Frank, and his nephew Ryan.

Friends will be received at the Keith Ovington Funeral Home, 134 King Street, Burford on Sunday from 2-4 and 7-9 p.m. Parish prayers will be held on Sunday in the funeral home at 1:45 p.m. Mass of Christian Burial will be held at Blessed Sacrament Church, 183 King Street, Burford on Monday September 23, 2019 at 11:00 a.m. As expressions of sympathy, donations in Karl’s memory may be made to the Lions Foundation of Canada Dog Guides or a charity of your choice. Keith Ovington 519-449-1112. www.keithovington.ca
Read Less

Donations are being accepted for: Lions Foundation of Canada Dog Guides.

We encourage you to share your most beloved memories of Karl here, so that the family and other loved ones can always see it. You can upload cherished photographs, or share your favorite stories, and can even comment on those shared by others.

Love, MJ & Austin, Don & Ginger Bradshaw, and other have sent flowers to the family of Karl Hepp.
Show you care by sending flowers

Posted Sep 23, 2019 at 07:37am
Sending our love to your family during this difficult time. May you find comfort in each other & the loving memories of Karl.

Posted Sep 22, 2019 at 02:49pm
I am so sorry to hear the news of Karl's passing. He was a great friend, a hard worker and I know a loving father and grandfather. He will be missed, I cherish the memories from times past and hold them close to my heart.
Tim Malcolm
Comment Share
Share via:
KM

Posted Sep 21, 2019 at 01:50pm
Karl was truly a gentle, sweet man. Always kind, warm, and as the beloved husband of my best friend, I know this to be true. When Minnie (Joan to others) returned from spring break while we were in college, she called me at school to tell me about the man she was going to marry. Years later I asked Karl if it was love at first sight as it was for Minnie, and he said he saw this “beautiful, long legged girl with long beautiful hair in a flowing white dress walking on the beach” and told his friends he was going to “marry that girl”. Just like in a movie. A few years later my future husband and I attended their beautiful wedding. The way they looked at each other reciting their vows, well, it was a special day. They went on to have two beautiful kids. I knew Laura more than I did Matt, because Karl look his lovely bride to live in Canada, so there were years that passed when we didn’t see the Hepp gang, but we never lost touch, exchanging letters and phone calls, many times Karl answered the phone, and talking to him was like talking to my best friend. He was always interested in my family, and shared stories about Laura and Matt, especially when they were young kids. His pride in them was real, the way he talked about Minnie just oozed with love, he was still besotted with her after so many years! No marriage is perfect, they had their ups and downs, lost loved ones, as any marriage will endure. We’re older now, more years behind us than ahead of us, but while Karl and Minnie weathered the toughest times....their kindness and devotion toward each other never wavered. Karl is the type of man who people will always remember for his good nature, and will be deeply missed. For Minnie, Laura, Matt, and grandchildren, my thoughts and prayers will be with you every day. You were truly blessed with a wonderful husband and father, but Karl would be the first to say HE was the most blessed. I love you, Minnie, and just a phone call away. Be strong. Karl was a much loved man by many. Love and prayers, Kerry
Comment Share
Share via:
DB

Posted Sep 20, 2019 at 11:17am
Our deepest condolences to the Hepp family. We are so sorry for your loss. You are in our thoughts and prayers . With love at this sad time.

Our deepest condolences. Our thoughts and prayers are with you and your family during this difficult time. 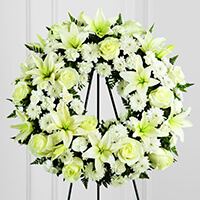 Team from Kingsmen Group Inc. purchased the The FTD Treasured Tribute Wreath for the family of Karl Hepp. Send Flowers