To share your memory on the wall of Marlyn Morrell, sign in using one of the following options:

Marlyn was a devoted member of the Army, Navy & Air Force Club Unit 341 and the Royal Canadian Legion Branch 90.

Friends will be received at the Keith Ovington Funeral Home, 134 King Street, Burford on Thursday from 6-8 p.m. Funeral service will be held in the chapel on Friday, June 14, 2019 at 1:00 p.m. Interment Pioneer Cemetery, Burford. As expressions of sympathy, donations in Marlyn’s memory may be made to the Burford Optimist Youth Fund, Canadian Cancer Society or a charity of your choice. Keith Ovington 519-449-1112 www.keithovington.ca

Special thanks to the staff at the John Noble Home, Cockshutt Place for their amazing care of Marlyn.
Read Less

Donations are being accepted for: Burford Optimist Youth Fund.

We encourage you to share your most beloved memories of Marlyn here, so that the family and other loved ones can always see it. You can upload cherished photographs, or share your favorite stories, and can even comment on those shared by others.

Much love Nadine, Danielle, Alan, Kristin and the and The Skater Family sent flowers to the family of Marlyn Evangeline Morrell (Antler).
Show you care by sending flowers

Posted Jun 12, 2019 at 08:35am
So sorry to read of Marlyn;s passing. I have many memories of Marlyn from the Army, Navy and Airforce Unit 341. She will be missed. My thoughts and prayers are with the family.

Much love Nadine, Danielle, Alan, Kristin and the

Much love Nadine, Danielle, Alan, Kristin and the purchased flowers for the family of Marlyn Morrell. Send Flowers

Posted Jun 11, 2019 at 08:32pm
Please accept our most heartfelt sympathies for your lossour thoughts are with you and your family during this difficult time.

The Skater Family purchased the Blooming Garden Basket for the family of Marlyn Morrell. Send Flowers 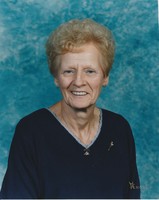